This document covers the architectural differences between BNB Chain and Solana blockchain, providing an overview to developers aiming to migrate their projects from Solana to BNB Chain ecosytem.

BNB Chain has since garnered immense popularity and is now the largest smart contract-powered blockchain network as it provides users with speed, security, scalability, and innovative features. BNB Chain comprises two parts, the Beacon Chain (BC) and the BNB Smart Chain (BSC). BSC offers dApp development, is Ethereum Virtual Machine (EVM) compatible and uses the EVM for smart contract execution. This means that all of the tools and infrastructure compatible with the Ethereum network can also be used with the BSC network. Also, porting projects onto BSC from other EVM-based chains is possible.

On the other hand, one of the most popular non-EVM-based blockchain networks is the Solana blockchain. By being non-EVM based, this means that Solana has its own set of token standards, dev tools, infrastructure, etc., for dApp development. This also means that the majority of the Ethereum-compliant tools and standards cannot be used on the Solana network. Solana initially gained good traction in the Web3 ecosystem, though it also faced incidents of non-availability, scalability, and security issues, leading some projects to consider other options available in the market such as BNB Chain.

In this article, we provide an overview of the architectural differences and other technicalities amongst the two blockchains BNB Chain and Solana. This will help developers understand any adaptations required if they need to migrate a project from Solana to BNB Chain.

In this section, we provide an introductory overview of both of the blockchain giants, namely, BNB Chain and Solana.

The BNB Chain ecosystem comprises two blockchain giants, namely, Beacon Chain (BC) and the BNB Smart Chain (BSC). The Beacon Chain is responsible for the Governance of the BNB Chain (Staking, Voting). Whereas, the BNB Smart Chain (BSC) blockchain, founded in 2020, is EVM compatible and contains consensus layers and hubs to multi-chains. The BNB Token is the native cryptocurrency of the ecosystem that is used for both staking purposes as well as for payments of transactions over the network.

BSC runs parallel to the Beacon Chain and is the EVM-compatible component of the BNBChain ecosystem, and offers smart contract functionality for creating dApps and other blockchain-based products. BSC gained real popularity in early 2021 because of its lower gas fees and faster finality as compared to Ethereum's high gas fees and scalability problems. BSC uses the Proof-of-Staked-Authority (PoSA) consensus algorithm i.e, it merges delegated Proof-of-Stake with Proof-of-Authority (PoA).

Launched in 2017, like BSC, Solana is a Layer-1 blockchain platform with smart contract functionality for programmability purposes. The native cryptocurrency of Solana is SOL which, like BNB in BSC, is used for network validations and payment of fees. As compared to its main competitor, Ethereum, Solana has faster transaction times and lower costs. Solana attains consensus utilizing a Proof-of-Stake (PoS) mechanism, as well as a “Proof-of-History” (PoH) mechanism. Solana states that the merger of PoS and PoH improves scalability without deviating from decentralization and security.

In this section, we provide a brief overview of the architecture of both BSC and the Solana blockchain network.

BNB Chain is an ecosystem comprising two major blockchains that serve different purposes, namely, Beacon Chain (BC) and BNB Smart Chain (BSC). To deal with the increased transactions and DAU, the BNB Chain ecosystem has evolved to add more scaling solutions and now comprises the following components with different responsibilities and purposes. 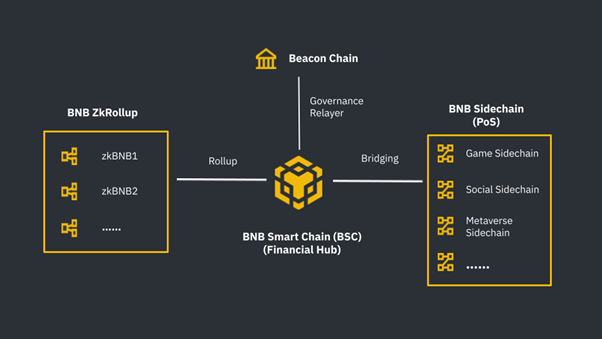 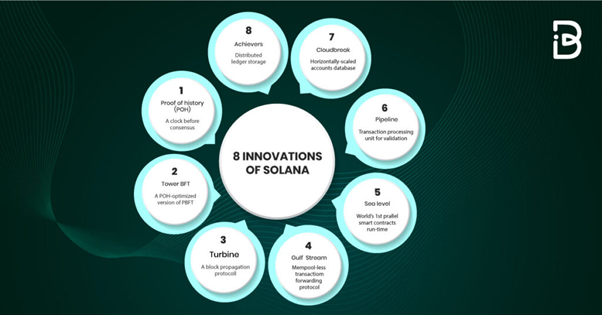 In order to create a decentralized and permissionless network, the Solana ecosystem comprises 8 key technologies:

In this section, we discuss and compare the differences in the architecture and underlying working mechanisms of both BSC and the Solana network.

Other than the underlying working mechanism like consensus and security, architectural differences affect the way dApps are programmed on either of the blockchain networks.

In this section, we highlight some of these major differences that a web3 developer should be aware of when programming dApps on either of the blockchain networks.

With a multitude of blockchain platforms available for development in the Web3 domain, BNB Chain has emerged amongst the top ranks. BNB Chain offers developers speed, security, efficiency, and low cost with ensured scalability. In this article, we have provided a detailed comparison of the architecture of the BNB Smart Chain and the Solana network. This article is aimed at giving readers understand the differences in the underlying architecture.